Our Story: The big question

If you’re new to the blog, Our Story is a series that we began last year where we’ve been sharing our own love story from beginning to now. It’s been a little while so if you can’t remember what happened last, you can go back here!

Once I have an idea in my head, I need to make it happen. No matter what it is, I won’t stop until I have it done. Perhaps some would say i’m a high-achiever, a go-getter? So once I knew I wanted to marry Ron, I wanted it to happen right away. I wanted him to propose so I could start planning our WEDDING! I didn’t want to wait until he was ready to ask me or until the most practical timing. He had let me know that he shared the same feelings and was on the same page with thoughts about a future together so I thought… why wait?  Perhaps this was not how I should have been thinking because the next year and half felt like ETERNITY. We were about to start second year university and Ron sort of gave me a tentative timeline of when he might propose. It would be sometime between then and the next summer. We had decided that we would wait to get married until after we were both done our undergrad degrees but I just couldn’t WAIT to be engaged! Looking back, I don’t know how Ron put up with me that year. I would constantly tease him about it and suspected a proposal on numerous occasions. This only led to disappointment and me having to explain that the reason I was all mopey and quiet was because I didn’t get a ring that night. By the start of the next summer, I had given up all together. I had resorted to telling him I would accept a ring out of a gumball machine. But when that didn’t even work, I decided I had to stop thinking about it.  I suddenly realized how silly I was being about the whole situation. We had given our relationship to the Lord and constantly prayed that he would lead and direct our every move yet I was  so impatient and was trying to control this part of it. I was trying to persuade Ron to hurry up and ask me already when I should have been trusting that he was following the lead of the Holy Spirit and that he would ask me when the time was right. I remember apologizing to Ron for putting so much pressure on him and letting him know that I was going to patiently wait and not say another word.  But I still secretly hoped it would be sooner then later.

Because I was an RA in my university dorms, I was required to head back to campus a week and a half prior to school starting for leadership training. I was all packed and ready to go. Ron suggested we go on a date before I left. Part of me wondered if this might be the big day but I promised myself I wouldn’t try to guess anymore so I dismissed the idea and looked forward to our last hang out of the summer. I was heading for a shopping trip to the States that day with my mom and expected to be back late afternoon but when our trip was delayed a few hours, I called Ron to let him know that we may have to postpone our date. When he didn’t seem to be bothered by it and said we could hang out the following evening, this confirmed that nothing special was going on. He would have been more upset at me or acted even a little disappointed that I had messed up his big plans right?

The next evening, Ron picked me up for supper. He told me he had made reservations at Thyme on 21, one of the more “upscale” restaurants in our tiny town. We talked about our summer and plans for the school year as we enjoyed a fancy meal. As we walked back to the car, Ron asked what I wanted to do now. I suggested maybe a drive down to the beach. He seemed relieved at my idea as he pulled out of the parking lot and headed in that direction. He drove very slowly and held my hand as we breathed in the last air of summer blowing through the open windows. After we walked along the board walk for a bit, we got back in the car and headed back up the hill. But he didn’t drive straight back to my house to drop me off as I assumed he would. He headed in the opposite direction along the top of the beach. I suddenly knew where we were headed. He was taking me to our special spot. The spot where we had had our first kiss in highschool, the spot where we would often walk to to chat and pray together and share our hearts and dreams with each other. Perfect way to end off the summer. He parked the car and led me to the bench. The sun was about to set over the water which made for the most perfect scene. This is about the point when I started to become a little suspicious again. Ron got all serious, reminding me of significant points in our relationship and telling me what he loved about me. His knee started to shake double time like it does when his hockey team is minutes away from winning a game. He asked me if I remembered the last most significant thing that happened  at this spot. We giggled as we thought about our very first kiss back in grade 12. Then he pulled a box from his pocket and said ” I think I can one-up that tonight”. That’s when I lost it. He did too. We were both bawling. He was down on one knee and I don’t remember what he said after that moment. But I remember shouting YES. yes yes yes! I was so in love with this guy and I couldn’t wait to tell everyone that we were finally ENGAGED! 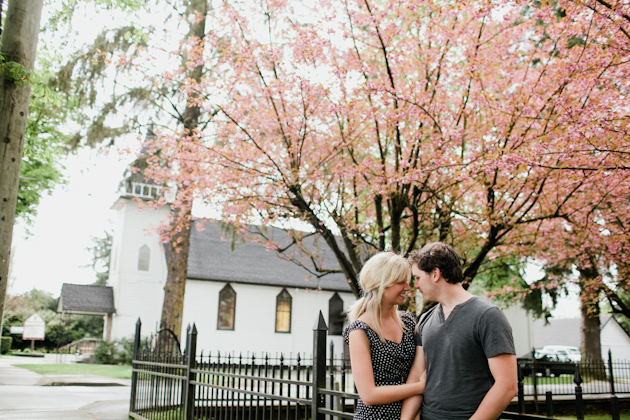 Of course there is always pressure on the guys when it comes to proposing. Some put a whole lot of thought into it. Others just pull the engagement ring out one morning while laying in bed.  My idea of the perfect proposal was something simple and sweet. I wanted it to be romantic but something that was significant to only us.  After hearing about my friend’s recent proposal to his girlfriend, it gave me more courage that it wasn’t that tough of a thing to do… after all, this is the love of my life right? I knew I wanted to marry her and  after a lot of prayer and consideration, I felt in my heart that it was finally time to tell her.

I  knew the type of ring Natalie wanted but didn’t let her choose the exact one as I wanted to pick something out that we both would like (I have to look at this thing the rest of my life too!).  I would make frequent trips up to the jewellery store on the square and mull over which ring to get.  On a tug boat captain’s… I mean tug boat general labourers wages over a span of only 4 months, I wasn’t able to get much at the time.  I found what I felt was perfect though and I started to save up money as I knew the summer would soon be over. When I finally saved up enough, I thought that before I bought the ring I should ask for her dad’s blessing as that is the proper thing to do.  I caught him at a time when he was heading out for a walk and went with him unbeknownst to Natalie as she was at work.  After talking to her dad for a few minutes, he accepted (who wouldn’t want me in their family) and I knew it was time to get the ring and wait for the perfect chance to ask.

I decided on taking her out to dinner and then I would take her to our special spot. The spot where we had shared so many memories… including our first kiss. It was the rock on top of the hill looking over Goderich harbour. I made reservations at Thyme on 21, one of the more fancy restaurants in Goderich where we enjoyed a beautiful dinner.  Afterwards, we made our way down to the beach and walked the boardwalk all the way down to the cove and back.  It was a beautiful night and everything was going the way I wanted it to.  I wanted to plan it so that the sun was setting as we made our way up to the rock overlooking the harbour. The problem was that it was only 8pm and in the middle of summer it doesn’t even start to get dark until around 9:30.  I found myself trying to delay and driving super slowly, wanting it to be the perfect setting.  Eventually I decided I couldn’t delay any longer and figured I would just have to explain my predicament to Natalie after!

At the bench, we talked about all we had been through with our relationship and discussed where we wanted to be in our own lives and together.  I reminded her about the times late at night we would venture over to ‘the rock’ and how it was such a special spot for us.  I stood her up and held onto her hands.  I started to shake as I was very nervous. It reminded me of how I felt 2 and a half years prior before I asked her to be my girlfriend.  I assumed she would say yes but guys, you know what I’m talking about… there is always that tiny fear at the possibility of rejection. Based on the past year and how much she bugged me about a proposal,  I highly doubted it. I just didn’t want to rule it out as I had a backup plan (I think).  ANYWAYS, I asked her if she remembered our first kiss, and then told her that tonight, I wanted to do something even better.

I knelt down in front of her, pulled the ring from my pocket and asked Natalie to marry me.  She said YES! 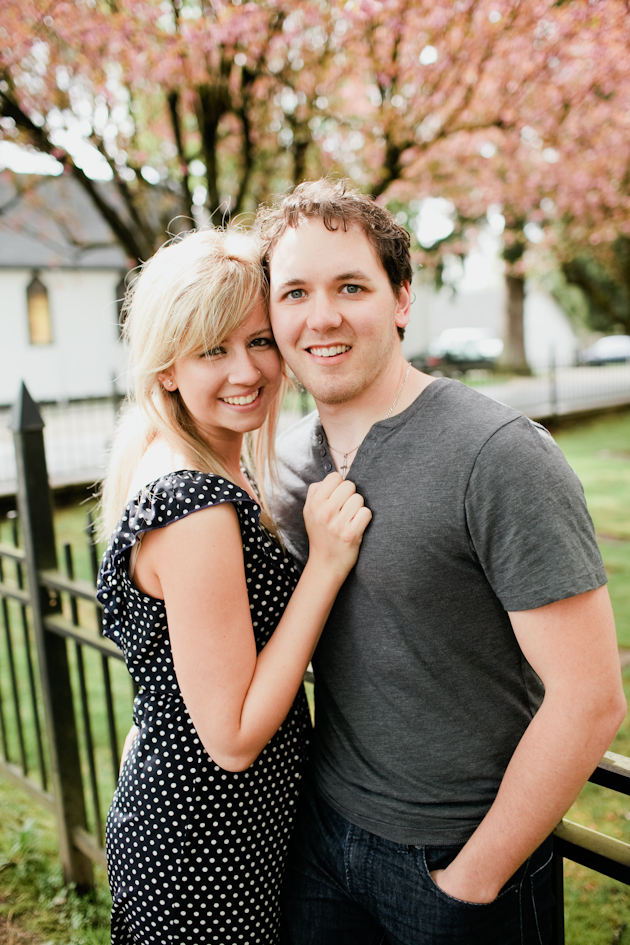